The Distinguished Scientist Award recognizes outstanding mid-career scientists who have made significant contributions to the field of in vitro biology and/or in the development of novel technologies that have advanced in vitro biology. The Society for In Vitro Biology honored Zeng-Yu Wang as the first recipient of the Distinguished Scientist Award at the 2015 In Vitro Biology Meeting in Tucson, Arizona. 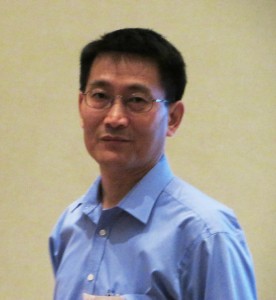 It is safe to say that Zengyu Wang is a scientists’ scientist, and that forage plant biotechnology would not be at its current stage without his critical contributions.  He has pioneered genetic transformation systems in a wide range of taxa, including switchgrass, fescue, and alfalfa.  Pre-Zengyu, these and other systems were either practically non-existent or very inefficient. As a scientists’ scientist, Zengyu and his team of researchers built some transformation systems from the ground-up, and in other cases, he deconstructed systems and put them back together so that they then worked efficiently.  Not only would his methods work in his lab, but they could work for any lab, which is an important goal of science. His transformation systems have enabled increased biological understanding of key forage plants and the use thereof. 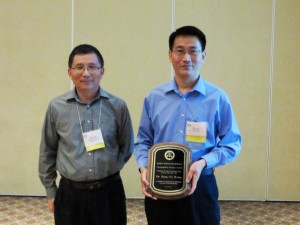 Zengyu Wang’s professional pedigree is a testament to why he is a distinguished scientist in his field: his mentors, distinguished in their own right, surely recognized Zengyu’s potential from the earliest days of his career. After taking a PhD from Beijing Agricultural University (now known as China Agricultural University), Zengyu went on to work with Ingo Potrykus in Zurich and German Spangenberg in Melbourne. I’m sure Zengyu made them better scientists, just as he has made us better scientists as we’ve had the opportunity to interact with Zengyu.

Dr. Wang’s scientific productivity and innovation is unquestioned. He has authored over 100 journal articles and book chapters in various prestigious titles. He is an inventor on nearly a dozen patents.  He joined the Samuel Roberts Noble Foundation as an assistant professor in the Forage Improvement Division in 1998.  He rose through the ranks at the Noble Foundation where he is currently a professor, Senior Vice President, and Division Director.  Dr. Wang has continued to advance in his career and knowledge. He continues to inspire others in science.