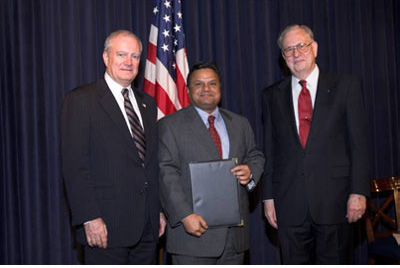 On November 16, 2005, the White House announced the recipients of the 2005 Presidential Award for Excellence in Science, Mathematics and Engineering Mentoring (PAESMEM)–a program supported and administered by the National Science Foundation (NSF). Each award includes a $10,000 grant for continued mentoring work. SIVB member, Dr. Sarwan Dhir of Fort Valley State University, was one of the recipients of this prestigious award. Since 2001, Dr. Dhir has hosted an NSF-funded Research Experience for Undergraduates (REU) in Biotechnology benefiting ten students per year. Dhir’s mentoring has emphasized support of independent research, self-confidence and teamwork skills, oral and written communication of research, and career guidance.

Dhir’s program brings minority students from the U.S. mainland and Puerto Rico to participate in a summer program at the Center for Biotechnology. Dr. Dhir also mentors numerous high-school students. The pupils collectively have won 198 awards and made 190 presentations. In addition, 238 students of the students mentored have participated in conferences, and 15 have published papers as a senior author or co-author. Two high-school students were finalists in the Siemens Westinghouse competition.

PAESMEM honors individuals and institutions that have enhanced the participation of underrepresented groups–such as women, minorities and people with disabilities–in science, mathematics and engineering education at all levels. Since its inception in 1996, the PAESMEM program has recognized 97 individuals and 68 institutions. Each year’s awardees add to the recognition of a widening network of outstanding mentors in the United States, assuring that tomorrow’s scientists and engineers will better represent the nation’s diverse population. This year, 10 individuals and one institution received the award.