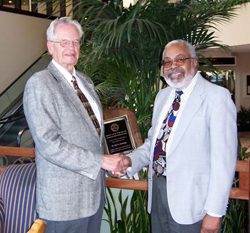 The highest honor given by the Society for In Vitro Biology is the Lifetime Achievement Award. It is presented to scientists who are considered pioneers or highly influential researchers to the science and art of cell culture. They are men and women who have devoted their careers to exemplary research and/or teaching. The recipients of the Lifetime Achievement Award are selected by vote of the Board of Directors from a list of nominations received and recommendation by the Awards Chair. Amy Wang was the chairperson for 2005.

The Lifetime Achievement Award was presented to two scientists at the 2005 In Vitro Biology Meeting in Baltimore, Maryland. The Awardees were Oluf Gamborg and Robert S. Langer. Over the next issues of In Vitro Report, each of the winners will be highlighted with an article written by those who prepared the nomination.

The Lifetime Achievement Award was presented to two scientists at the 2005 In Vitro Biology Meeting in Baltimore, Maryland. The Awardees were Oluf Gamborg and Robert S. Langer. Over the next issues of In Vitro Report, each of the winners will be highlighted with an article written by those who prepared the nomination.

Dr. Oluf Gamborg began working with plant cell suspension cultures in the 60s, and made some seminal findings relating to the nutritional requirements for such cultures. During his career, Dr. Gamborg energetically worked to establish plant tissue culture as a viable and essential agricultural tool in many parts of the developing world, particularly Asia. Through his travels and his training activities, the technology spread rapidly. As a result, tissue culture techniques- such as micropropagation of elite genotypes and in vitro germplasm storage, now play a key role in the agricultural self-sufficiency of many countries. Indeed one paper outlined a medium, which is now referred to as Gamborg’s B5 medium, and is still one of the widest used media for cell cultures at present. In the early 70s, he began working on protoplasts and discovered, inter alia, the value of polyethyleneglycol (PEG) as an aid to protoplast fusion. This method is still widely used. His work in the 60s & 70s made the Prairie Regional Lab, Saskatoon (now Plant Biotechnology Institute) of the National Research Council of Canada a highly recognized center worldwide for in vitro technology.

The second phase of his career took Oluf to the USA, where he was a Senior Scientist/Research Director/Scientific Consultant for different biotechnology companies in California between 1979 and 85, where he exploited in vitro technology for applied purposes. He then moved on to Colorado State University (85-91), where he was Associate Director and Research Coordinator of the “Plant Tissue Culture for Crops” Project of the US Aid for International Development Agency. This involved various areas of in vitro research for salt tolerance, and also included organizing training courses, networking and consultancies in several developing countries. Some of this research resulted in publications, but more importantly it led to the establishment of tissue culture based research activities in several of these countries. From 1991 to 1998, he was a full time consultant to private companies and had major projects in Indonesia and Viet Nam.

Dr. Gambourg also played a role in the personal development of numerous scientists with whom he interacted in the early phases in our careers. My first working relationship with him was as a member of a. He chaired the TCA Committee on “Chemically Defined Media” in 1972, which also included Toshio Murashige and Indra Vasil. The report “Plant Tissue Culture Media” was published in In Vitro in 1976, and is still widely quoted. The International Association for Plant Tissue Culture was headquartered in Canada in 1974-78, mainly because of Dr. Gambourg, who was to be Chairman and President of 4th International Congress in 1978. That same year he organized and directed the 1st UNESCO International Training Course in Plant Cell Genetics in Agriculture in Brazil. The lab exercises, etc were then put together in a book to be edited by Oluf, and Academic Press published the widely used book “Plant Tissue Culture – Methods and Applications in Agriculture” in 1981. Earlier, Oluf had co-edited the first laboratory manual on plant tissue culture in 1975, and more recently he co-edited with Greg Phillips the book “Plant Cell, Tissue & Organ Culture, Fundamental Methods” in 1995. This activity by Oluf was to ensure that plant tissue culture techniques were widely available. Oluf co-organized the 1st Gordon Research Conference on “Plant Cell and Tissue Culture” in 1973.

Thus it is clear from the above that Oluf Gamborg would be a most worthy recipient of the SIVB Distinguished Lifetime Achievement Award. He has been a true leader in the field for over 40 years, and well deserves this recognition. 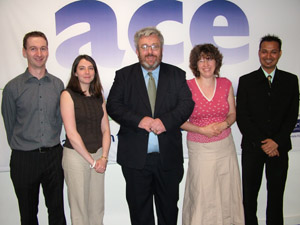