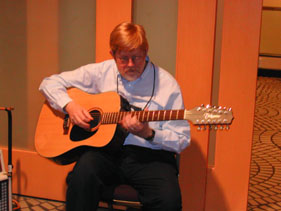 The Plant Fellow Award recognizes current members of the SIVB who have been active members for at least 10 years. A Fellow has made outstanding contributions in their area of specialization or discipline to include research, teaching, and administration in public, government, academic, or private industry activities.

“I came into my career path in a round-about way,” Greg Phillips states. “That pathway has colored my approach to science education and research.”

Greg’s father, Dr. Ronald E. Phillips, was a soil scientist at the University of Arkansas and the University of Kentucky. Both sides of his family have been tobacco farmers in north-central Kentucky. So, Greg grew up with an exposure to farming and to agricultural education and research, but that was farthest from his mind when he went to college. “Being a typical rebellious teenager, I was a philosophy major as an undergraduate and sang and played folk and rock music on the side. For a while I fantasized about being a professional musician.”

But Greg needed to partially support himself through college, so with his father’s covert assistance he found a part-time job on campus, working in the tobacco breeding and genetics program of Dr. Glenn Collins at the University of Kentucky. The Collins lab was on the other end of the Agriculture Sciences Building than his father’s, which was sufficient distance to maintain his rebellion. In Collins’ lab, he was exposed to tobacco anther culture research and the emergence of plant biotechnology. “I became fascinated with plant tissue culture and the ability to regenerate whole plants from cultured tissues and cells.” Greg has continued to offer undergraduate research opportunities to students in his own lab, because “I never would have found my profession by taking science courses, I only found it through the hands-on exposure to research. This is an element of science education that needs to be strengthened throughout the curriculum.”

Greg was mentored by Glenn Collins and by then-graduate student Dwight Tomes. With their encouragement and guidance on a tobacco ovule culture project, Greg entered the Undergraduate Research & Creativity Competition at the university and won first place in the Biological Sciences Division – before ever taking a course in biology! “This gave me my first inkling that I might have a career in the sciences – as a means to support my interest in music, of course.”

In 1975 Greg completed a B.A. degree in Philosophy. “I have always valued my liberal arts training, especially for discipline in logic and interpretation.” But, there were no jobs on the horizon. By this time he had met (in a coffeehouse where he was performing) and married Louise Dedman, who counseled him that a career as a musician was chancy at best. Glenn came to the rescue by offering Greg a graduate research assistantship in plant biotechnology. A career in plant genetics research, perhaps as a technician, appeared to be a very stable day job opportunity. Greg started a master’s program working on tissue culture of red clover and other legumes.

By the time that Greg had made up several science courses and completed the requirements for a master’s in crop science, he had completed two research projects related to red clover tissue culture. By this time, Glenn had him hooked. Glenn offered Greg the opportunity to skip the master’s degree and go straight for the Ph.D., knowing that he could always stop and write up a master’s thesis as a fallback. Glenn placed two conditions on this transition: first, write up the research projects as journal articles; second, go to the Prairie Regional Laboratory in Saskatoon, Canada (now, the Plant Biotechnology Institute) to study protoplasts under Dr. Oluf Gamborg for three months. Greg eagerly accepted. “The opportunity to study in one of the premier labs in the world, as a graduate sabbatical, was an exceptional gift both from Glenn and from Oluf and his colleagues.”

Glenn also provided Greg and his other graduate students with several opportunities to attend professional meetings, including the SIVB (formerly TCA) meetings. Greg continues this practice with his own students: “All of my students, graduate and undergraduate research assistants, go to as many professional meetings as I can afford to arrange for them.” Greg now is a regular participant in SIVB Congresses and has served as an officer of the Plant Section.

Greg received his Ph.D. degree in Crop Science in 1981 with a major in plant breeding and genetics and a minor in plant physiology. He returned to the University of Kentucky for a sabbatical in 1989-1990 to advance his training in plant molecular biology.

In 1981, Greg went directly to New Mexico State University, where he was located for 22 years. He served as the interim director (1983-1985) and then associate director (1986-1990) for the Plant Genetic Engineering Laboratory at NMSU, a research institute with a mission aimed at economic development through biotechnology. From 1992-1999, he served as the Director of the NMSU Molecular Biology Program, an interdisciplinary academic and research-training program encompassing faculty and students from several departments in three colleges. From 1996-1998 he was the Science Coordinator for the National Biotechnology Information Facility at NMSU.

Greg’s research has focused on the development and application of cellular genetics and biotechnology techniques to improve crops. He has worked with vegetables (including chile peppers, onions, and tomato), grain and forage legumes, woody plants and endangered cacti. In recent years his program has emphasized the development of genetic engineering methods for vegetables; and he has worked on the enzymology and molecular genetics of novel polyamine biosynthetic pathways in plants, especially in relation to their role in plant responses to abiotic stresses such as drought and high temperature. Various competitive grant panels and private companies have awarded his research support. Greg has mentored 42 undergraduate, 14 master’s, 6 doctoral, and 6 post-doctoral students. He has authored or co-authored 36 refereed journal articles, 31 invited chapters, co-edited a lab manual on plant tissue culture methods, and has over 88 other miscellaneous publications and abstracts. He has been an ad-hoc reviewer for 15 different journals and for over 23 panels or divisions of 8 different federal funding agencies.

Greg currently serves as the Dean of the College of Agriculture at Arkansas State University, arriving in July 2003. Since his arrival he has implemented curriculum innovations and new cross-disciplinary research initiatives. “Our curriculum improvements borrow extensively from my experiences as an editor, and my belief that science education needs to more closely resemble the activity of scientific research – as opposed to memorization of facts. Even at the undergraduate level, we now focus on information literacy, library research on various topics, analysis and interpretation of original research articles, peer review exercises, and both written and verbal scientific presentations.” The new research initiatives focus on the interface of agriculture and the environment, and on the interface of agriculture and medicine.

Greg credits Glenn for his primary development as a science writer and peer reviewer. “Glenn started me off writing up my research as an undergraduate and early as a graduate student, and showed tremendous patience in converting my ‘liberal arts’ style into a scientific style. He also initiated me into the peer review process on journal articles and grant proposals while a doctoral student. His feedback shaped my ability to write constructive reviews.” Since 1985, Greg has been an editor for the journal Plant Cell Reports, under the tutelage of Oluf Gamborg. “Oluf gave me considerable insight into the management of a scientific journal, and much of my editorial skills I owe to his mentorship.” From 1989-1998, Greg served as an associate editor for the SIVB journal In Vitro Cellular & Developmental Biology – Plant, and in 1999 he assumed the role of editor-in-chief for In Vitro – Plant. “Trevor Thorpe did a tremendous job in setting up the In Vitro – Plant journal. I am constantly impressed with the solidity of the foundation for this journal, and his feedback while I served as an associate editor was extremely valuable both during that time and subsequently when I took over as editor-in-chief.”

And, somehow, Greg has managed to continue his interest in music, “strictly as a semi-professional – meaning I continue to lose money at it,” and occasionally performs his original instrumental guitar music, such as at the Plant Section Social this year. His daughter, Jessalyn, is an aspiring singer – for now, at least. 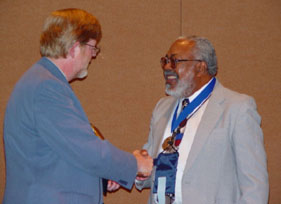