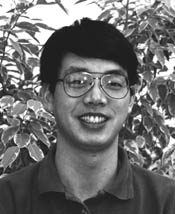 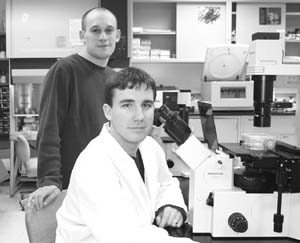 Transduction of Virulence and Resistance Signals

Pathogens of plants produce effector proteins necessary for successful parasitism. The effectors enhance pathogen virulence by manipulating signaling in the plant. Plants produce resistance (R) proteins that mediate recognition of specific effectors and respond by initiating plant defenses. In many cases, R-proteins perceive effectors indirectly; virulence signaling initiated by the effector is shunted, via the R-protein, into a resistance response. Therefore, by understanding how effectors manipulate virulence targets we will concurrently gain insight into how this signaling elicits R-protein mediated defense responses. SIVB 2003 Congress Symposium Proceeding: Plant-targets of Pathogenic Effectors can Transduce Both Virulence and Resistance Signal, David Mackey, In Vitro Cellular and Developmental Biology – Plant, 251 – 255, 2004. 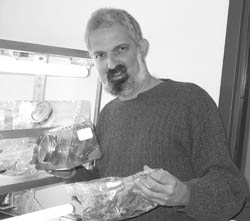 Plant Growth on the Rocker

Agitated, layers of liquid medium were created on platform shakers in jars with 25 to 30 ml medium (similar to conventional agar culture) rotating at 90 rpm. Thin films were scaled-up in larger rectangular vessels on tilted shelves that periodically rock. In jars of liquid medium with a density of 180 explants per liter, multiplication rates of Hosta tokudama var. ‘Newberry Gold’ were optimal with media sucrose concentration of 5% (both with and without 1µM benzyladenine (BA)). Endogenous levels of soluble sugars were directly related to the concentration of sucrose in the medium. Three Hosta cultivars (‘Striptease’, ‘Minuteman’ and ‘Stiletto’) with plant densities of 40 -200 explants per liter medium were tested in larger, agitated, thin-film vessels in media with 5% sucrose and directly compared to agar medium. Higher rates of multiplication were observed in liquid than agar with the magnitude of the difference dependent on explant density. Pooled results for the three varieties with 200 explants per liter showed multiplication rates of 1.7x and 2.3x for agar and thin-film liquid, respectively. At 40 explants per liter, multiplication rate was increased to 2.1x for agar and 3.4x for thin-film liquid. Sugar uptake was greater in liquid than agar and was greater in the higher densities, with the magnitude of the effect dependent on plant variety. Increased vessel size in the liquid, thin-film system and greater sugar uptake allowed more, larger plants to be harvested. Alocasia macrorrhizos was cultured in growth medium containing 1 µM BA and 5% sucrose with plant densities in the range of 33 -330 explants per liter. Dry weight and multiplication rate was greater in the liquid system than agar with the magnitude of the difference dependent on plant density. With approximately 165 explants per liter and greater at the initiation of culture, plant density limited growth in both agar and liquid thin-film systems. In a multiplication medium (3 µM BA and 3 µM ancymidol) plant size was reduced by 50% and 60% (fw) in liquid and agar, respectively. Initial density in the range of 165 – 330 explants per liter did not limit growth with the smaller plants in liquid or semi-solid multiplication medium. Sugar uptake was greater in liquid than agar. While ample sugar was present in media for growth at any density on agar, sugar depletion was limiting growth at highest densities with the larger plants in liquid growth medium. In semi-solid agar medium, sugar uptake by plants was more rapid than diffusion across the agar medium, resulting in non-equilibrium conditions following the culture cycle. In agitated, liquid medium, a greater transfer of sugars to plant tissue was related to accelerated growth. Jeffrey Adelberg, 2003 Congress Symposium Proceeding: Plant Growth and Sugar Utilization in an Agitated, Thin-film Liquid System for Micropropagation, In Vitro Cellular and Developmental Biology – Plant, 245 – 250, 2004 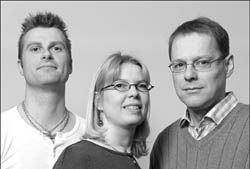 Mesenchymal-like cells in the stroma of breast cancer may arise as a consequence of plasticity within the epithelial compartment, also referred to as epithelial-mesenchymal transition (EMT), or by recruitment of genuine mesenchymal cells from the peritumoral stroma. Cells of both the epithelial compartment and the stromal compartment express a-sm actin as part of a myoepithelial or a myofibroblastic differentiation program, respectively. Moreover, since both epithelial- and mesenchymal-derived cells are non-tumorigenic, other means of discrimination are warranted. Here we describe the contraction of hydrated collagen gels as a rapid functional assay for the distinction between epithelial- and mesenchymal-derived stromal-like cells irrespective of the status of a-sm actin expression. Three epithelial-derived cell lines and three genuine mesenchymal-derived breast cell lines were plated on top of hydrated collagen lattices. Reduction in gel height was measured every hour for 6 hours and after 22 hours using an x-y-z automated position table. Significantly, the epithelial-derived cells, irrespective of a high a-sm actin expression, had a five-fold lower contractility (10.0% reduction in gel height) compared to their true mesenchymal counterparts (53.1% reduction in gel height). To test whether at all force generation could be induced in the non-mesenchymal cells by a-sm actin, transductions were performed to obtain a tetracycline-dependent expression. Expression under these conditions did not augment contractility. It is concluded that epithelial-derived, mesenchymal-like cells are functionally defective within a connective tissue environment irrespective of an apparent contractile phenotype. Helga Lind Nielsen, Thorarinn, Gudjonsson, René Villadsen, Lone Rønnov-Jessen, and Ole Wiliam Petersen, Collagen Gel Contraction Serves to Rapidly Distinguish Epithelial- and Mesenchymal-derived Cells Irrespective of a-smooth Muscle Actin Expression, In Vitro Cellular and Developmental Biology – Animal, 297 – 303, 2003.

Polymorphism of the Urokinase Gene

Single nucleotide polymorphisms (SNPs) are differences in the nucleotide sequence of a specific gene from different individuals. The frequency at which SNPs occur varies between individuals, is gene-dependent and may be influenced by the aging process or by mechanisms that result in cell transformation. Urokinase plasminogen-activator (uPA) is a serine protease that is important in embryonic development, aging and the onset of pathogenic conditions. The frequency of SNP and the stability of the SNPs in the uPA gene have not been defined with regard to processes that are associated with cellular aging or transformation. In the following study the complete nucleotide sequence has been determined for the gene encoding uPA from 26 human diploid kidney cell lines. The frequency of SNP occurrence within the uPA gene was determined and whether this frequency changed during cellular aging or following cell transformation. The results of these studies demonstrated three donor-dependent single nucleotide polymorphisms (SNPs). One SNP was located at base pair 422, which is in the region of the gene responsible for encoding the high molecular weight domain of uPA (HMW-uPA). The other SNPs were located at base pairs 691 and 822, which are both in the region of the gene responsible for encoding the low molecular weight domain of uPA (LMW-uPA). SNPs were not detected in the portion of the gene responsible for encoding the uPA secretion signal. Leucine or proline would be encoded at amino acid 141 of HMW-uPA as the result of an SNP at base pair 422. The SNP detected at base pair 691 would encode for lysine or glutamine at amino acid 231 of LMW-uPA. The SNP associated at base pair 822 would not change the encoded asparagine located at position 274 of the protein. The SNPs identified in this study were donor-dependent and were not altered during cellular aging or by changes in karyology due to spontaneous transformation of the cell line. These results demonstrate that the integrity of the uPA gene is stable and not subject to alterations that accompany cell aging or transformation. Polymorphism of the Urokinase gene during the aging and transformation of normal human cells. Safedin H. Beqaj, David Post, and Jon M. Ryan, Single-nucleotide polymorphism of the Urokinas-plasminogen Activator Gene During Aging and Transformation of Human Diploid Kidney Cell Cultures, In Vitro Cellular and Developmental Biology – Animal, 343 – 347, 2003.

Using primers for the MCT118, YNZ22, and COL2A1 loci in polymerase chain reaction analysis we could distinguish among the ~20 cell lines routinely maintained in our laboratory. We also demonstrated that the cell line NB-1691 (a neuroblastoma) and its xenograft had an identical number of repeats at two loci. Rh30 ( a rhabdomyosarcoma ) made resistant to rapamycin was identical to its parent line and to a subline that had reverted to sensitivity after it was cultured without rapamycin in the medium. Allyson L. Anding, Tanika Reiss, and Glen S. Germain, Analysis of Three Variable Number Terminal Repeat Loci is Sufficient to Characterize the Deoxyribonucleic Acid Fingerprints of a Panel of Human Tumor Cell Lines, In Vitro Cellular and Developmental Biology – Animal, 273 – 275, 2003.

Embryogenic soybean [Glycine max (L.) Merrill] cultures were transformed with a Manduca sexta chitinase (msc) gene using microprojectile bombardment. A 1.7 kb DNA fragment encoding a tobacco hornworm chitinase was cloned into the rice transformation vector pGL2, under the control of the maize ubiquitin promoter and linked to the hpt gene as a selectable marker. After bombardment, hygromycin-resistant tissues were isolated and cultured to give rise to clones of transgenic material. Four hygromycin-resistant clones were converted into plants. Two clones were positive for the msc gene via Polymerase Chain Reaction (PCR) and Southern blot analysis. The integration, inheritance, and expression of transgenes were confirmed by molecular analysis of transgenic soybean plants. Progeny analysis showed that the introduced genes were inherited and segregated in a 3:1 Mendelian fashion. DNA blot experiments and progeny inheritance analysis indicated that the plants contained several copies of the msc gene and that the insertion occurred at a single locus. Northern blotting analysis confirmed the expression of the transgenes. Western blot analysis of transgenic plants and their progeny revealed the presence of a protein with a molecular weight of 48 kDa that reacted with the Manduca sexta antibody. Progeny from the chitinase-positive plants were tested for their resistance to the soybean cyst nematode. Plants expressing the insect chitinase did not manifest enhanced resistance to the soybean cyst nematode. W. Ornatwski, J. Jayaraj, T. C. Todd, W. T. Schapaugh, S. Muthukrishnan, and H. N. Trick. Introduction and Constitutive Expression of a Tobacco Hornworm (Manduca Sexta) Chitinase Gene in Soybean, In Vitro Cellular and Developmental Biology – Plant, 260 -265, 2004. 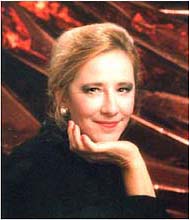