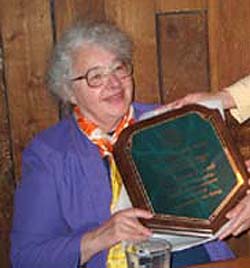 The Invertebrate Fellow Award recognizes members of the SIVB who have been active members for at least 10 years. A Fellow has made outstanding contributions in their area of specialization or discipline to include research, teaching, and administration in public, government, academic, or private industry activities. This was the first Invertebrate Fellow Award to be presented by the SIVB.

Dr. Marcia J. Loeb and her many contributions to the field of invertebrate cell culture, during the last 40 years, are worthy of recognition. She has been not only an excellent endocrinologist and reproductive biologist of insects, but also a pioneer in the application of in vitro technology to basic and applied biology in insect science field for more than 20 years. Her expertise in invertebrate physiology, neurobiology, endocrinology, cell biology, and tissue/organ culture was directed toward elucidating the regulation of insect molting, metamorphosis, and diapause. Dr. Loeb clarified the role of hormones and neurosecretory products in controlling diapause and diapause development in the gypsy moth and identified the critical periods in the regulation of the insect larval-pupal molt in the tobacco budworm. She has been an active member of the Society for In Vitro Biology (SIVB), serving as chairperson of Invertebrate Section of the Society, and president of the local Washington DC chapter, and has worked as an organizer or co-organizer for many national and international symposia on cell culture technology in which SIVB had been involved.

Upon joining the Insect Reproduction Laboratory, Dr. Loeb undertook pioneering studies in which she elucidated the nature, progress, and regulation of sperm development in lepidopteran insects. She discovered that the lepidopteran testis is an endocrine organ, which produces and secretes ecdysteroid according to a precise timetable (results published in Science). She went on to demonstrate that testis ecdysteroid production is under the control of a previously unknown brain hormone, and that factors produced by testis sheath and fat body worked in conjunction with ecdysteroid in stimulating spermatogenesis as well as genital tract development. In addition, she identified the second messengers involved in this cascade of events. Thus, Dr. Loeb was the first to demonstrate the role of new growth factors as well as second messengers in the maturation of sperm and the differentiation of the male reproductive system.

In 1996, Dr. Loeb was transferred to the Insect Biocontrol Laboratory, where again, she made many significant contributions to the field of invertebrate zoology. She established an in vitro culture system to keep midgut stem cells of several lepidopteran species including Heliothis, a research first. This system opened an entirely new channel to closely study the regulation of cell numbers and differentiation. She also identified the presence of midgut stem cells from which the functional midgut goblet and columnar cells are produced and isolated some previously unknown regulatory peptides such as MDFs, midgut differentiation factors from both fat body and from medium conditioned with midgut cells. Dr. Loeb’s system has been used to study the mode of action of viruses and other insecticidal agents in compromising the insect midgut and destroying pest insects.

Dr. Loeb’s research accomplishments have been recognized nationally and internationally, as evidenced by the many invitations that she has received to present seminars describing her research results. She has also been invited to organize symposia that focus on her area of expertise. In addition, scientists from all over the world have established collaborations with Dr. Loeb and have sent personnel to her laboratory to be schooled in techniques and procedures that Dr. Loeb has developed.

Dr. Loeb also believes in contributing to student training. High school, college undergraduate, masters and PhD students have all obtained insect culture training in Dr. Loeb’s laboratory, and her teaching has inspired many graduate students who came to study in her laboratory. Several important contributions in the field have been produced by her students as a direct result of studying with her. Her laboratory has become a magnet for training biologists from other countries in midgut culture techniques. She has maintained international collaborations on insect culture, and this research in midgut culture has been the basis of a symposium she convened during the 2000 World Congress on In Vitro Biology. In the last 5 years, she has co-authored 17 papers and one review, six of which have been published in In Vitro Cellular and Developmental Biology – Animal.

While it was active, Dr. Loeb was a driving force in the Washington Area chapter of the SIVB for over a decade. Along with a small cadre of others, she made this local chapter a vital force in the local tissue culture community.

Dr. Loeb has also offered dedicated service to the other scientific societies to which she belongs. She has served on the Board of the International Conference on Insect Neurochemistry and Neurophysiology and served as an officer of the National Tissue Culture Society, has organized international and regional meetings and has served in the capacity of Program Chair, Local Arrangements Chair and Publicity Chair. Her support of scientific interaction, collaboration, and dissemination is evidenced by her willingness to organize and coordinate seminar series both for ARS and for professional scientific societies. 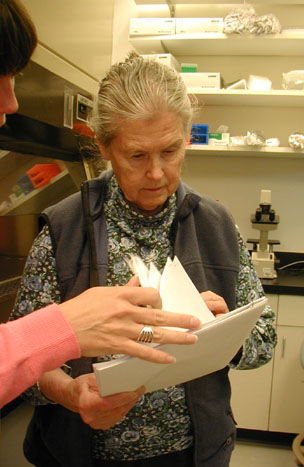 2003 Fund for the Future Contributors